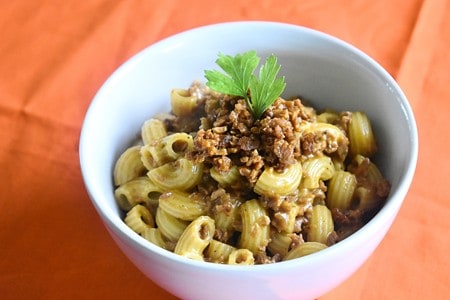 Most vegans can admit that cheese and dairy were one of the biggest things to give up – apart from bacon. Well here’s a recipe for a creamy, “cheesy” and “meaty” hamburger mac and cheese. Yes, you heard right. This mac and cheese feature a vegan minced meat substitute that has an amazing meaty texture so that you won’t miss the meat at all.

What makes it cheesy you might ask? That would be a vegan favorite and pantry essential known as nutritional yeast. Nutritional yeast flakes give a yummy cheesy flavor to any dish and not to mention that it adds vital and essential proteins to the vegan diet. The addition of vegan shredded yellow cheddar cheese also added to cheesiness and not to mention the creamy texture.

Beef-flavored soy protein was used as the “hamburger” aspect. Some might shy away from soy because of dietary reasons or maybe just out of preference. If this is you, then feel free to omit it altogether or use another meat substitute like tempeh or even crumbled tofu.

This recipe is going to make dinner nights that much easier as this is a dish that both kids and adults alike can enjoy. Enjoy the recipe: 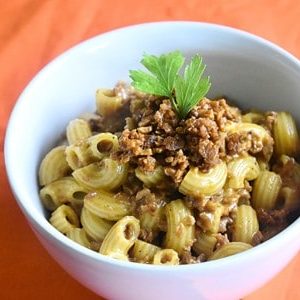 You can make your own ketchup at home with this recipe