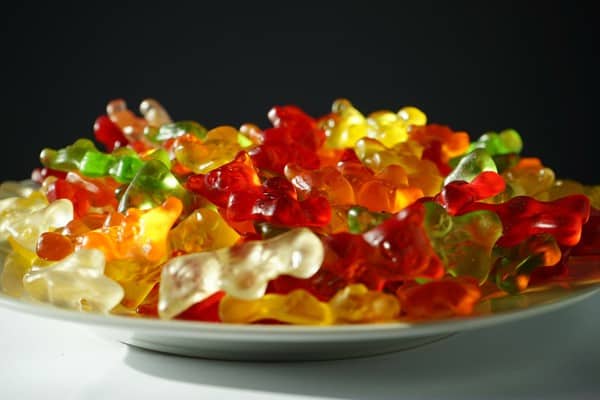 Gelatin, according to dictionary.com, is:

A virtually colorless and tasteless water-soluble protein prepared from collagen and used in food preparation as the basis of jellies, in photographic processes, and in glue.

How is Gelatin Made?

Collagen is the main structural protein that is found in skin and other connective tissue. Gelatin is made from skin and connective tissue of animals. Gelatin is yellowish in color, and made simply by boiling skin, cartilage, and bones from animals. Taking this a step further, the origins of these bones, cartilage and skins is leftovers from the meat industry. The meat industry quite literally boils pig skins, animal horns, and bones from cows. Not only is this not a vegan practice or final product, it is quite disgusting a process to watch. The meat industry has “trash” left over after animals are slaughtered for meat, but instead of leaving more potential money on the virtual table, they boil these leftovers and make gelatin.

Without realizing it, vegans and non-vegans are ingesting this substance by consuming products like gelatin (“jello”) desserts, fruit snacks, marshmallows, and some medicines, whether it is an ingredient inside of a liquid or medicine in pill form, a gelatin capsule, or as a gummy vitamin or something similar. Additionally, gelatin is in some glues and can be used in photography processing. Additionally, some people consume or apply gelatin to hair and skin for attempts at youthful appearance and elasticity of the skin, as well as for growth and strength of the hair.

What are the Vegan Alternatives to Gelatin?

Very occasionally, however, a product called agar agar, which is derived from seaweed, is marketed and labeled as gelatin. It does have similar properties and can be used as a substitute for gelatin; however, agar agar is NOT actual gelatin, as it is not derived from animal bones, skin, or cartilage. Agar agar is essentially the vegan version of gelatin. Gelatin in the true sense of the word is NOT vegan. Gelatin is not vegan simply due to the fact that it is made using parts of a living thing.

Here is a chart of common items containing gelatin and vegan alternatives:

For more candy options check out our article on Vegan Halloween Candy.