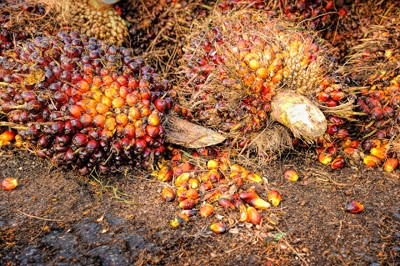 Humankind has a real knack for coming up with a great idea that, over time, really isn’t such a great idea after all. Plastic is a classic example of this. A “wonder material” at the start of the twentieth century, plastic is now a major pollutant problem. Yet despite that, still, the addiction to plastic remains. And the same is broadly true with palm oil production – great in moderation; awful in excess.
A versatile vegetable oil, palm oil has become a major problem for the environment. As the most widely consumed vegetable oil in the world, it has quite the knack of seemingly showing up in anything! Butter substitutes, soap, bread, cosmetics, doughs, cookies, shampoos, and detergents are just a selection of everyday products with palm oil in them. Consequently, it becomes very difficult to shop in any major store and come out the other side without having purchased something containing palm oil.
While many have heard of palm oil, some may not exactly be sure as to just what it is. Palm oil is an edible oil that is harvested from the fruit of African palm oil trees. Originally from West Africa, palm oil is now grown in numerous southern hemisphere countries and widely exported all over the world.
Palm oil has been cultivated by humans for centuries now. However, it is only in the twentieth and twenty-first centuries that palm oil production has become industrial in scale.
Indonesia is the world’s largest producer of palm oil, with Malaysia as second, and Nigeria as third. A range of other mostly southern hemisphere countries is also palm oil producers. Unsurprisingly, this is a big business that we are talking about and oftentimes when big business is on the scene, things can go awry and don’t always seem to be as they should.
Palm oil can be very misleading as it can be labeled as an ingredient under many different names.

Source: www.worldwildlife.org
Those names are just a small sample of the long list of names palm oil can be classified as. Good luck with trying to interpret all that…
The attraction of palm oil is that not only is it versatile as a commodity, it’s a cheaper vegetable oil when compared to other oils.
So far so good, right? Sorry to disappoint, but no. The widescale cultivation of palm oil has become incredibly bad news for the environment and impacts terribly upon a whole spectrum of animals.
The reason for this is that huge swathes of rainforest, for example, have been torn down to make room for palm oil trees. The problem is, of course, that those lost rainforests were home to any number of species of animal. In Borneo, for example, it has been estimated that in the last 16 years, 100,000 orangutans have been forced from their homes and ultimately perished as a result of palm oil cultivation.
Source: https://www.theguardian.com/commentisfree/2018/may/10/palm-oil-orangutans-multinationals-promises-deforestation
And it’s not just the case with Borneo. This is a widespread problem wherever palm oil production occurs. The industry has become a very real risk to critically endangered species such as orangutans, elephants, lions, tigers, bears, and rhinoceroses.
Add to that the innumerable other species that call a rainforest their home, and one starts to get a distinct feeling that palm oil is a very bad deal.
As if that wasn’t enough, then there is also the risk to humans that palm oil consumption poses, such as having high saturated fat content and significant calorific content.
The palm oil production industry is also notorious for poor working conditions and human rights violations, including the use of child labor.
Aside from the major problem of the destruction of rainforest and deforestation to make way for palm oil plantations, the adverse effect on the environment is actually multi-faceted. For example, when a rainforest is destroyed, this releases carbon dioxide into the atmosphere – a major green gas and contributor to climate change.
The bottom line is that humanity’s seeming addiction to palm oil, as things stand right now, is bad news for the animals, the planet, and humans themselves.
So, is it possible to have palm oil produced in an ethical fashion that doesn’t pose such significant dangers as those we have just seen? Maybe, but a lot of work still needs to be done.
One step in the right direction was that in 2004, the Roundtable on Sustainable Palm Oil (RSPO) was founded after pressure from an array of animal rights, social and environmental organizations.
The RSPO is a not-for-profit international organization that represents not only the palm oil industry but also manufacturers that use palm oil, environmentalists, social welfare organizations, and governments.
The stated objective of the RSPO is to limit the adverse effects of palm oil production by promoting ethical, sustainable practices.
Source:
https://rspo.org/about
While international standards have now been established by the RSPO, with some products now carrying an RSPO trademark, critics claim that the RSPO is only paying lip service to meaningful action. In particular, in 2013, Greenpeace released their “Certifying Destruction” report that identified how the RSPO was nowhere near to overseeing the ethical, non-destructive production of palm oil.
Source:
https://www.greenpeace.org/usa/sustainable-palm-oil-no-not-really
Further, critics of the RSPO allege that it is nothing more than a smoke-screen for the palm oil corporate industry to carry on as before while barely concealed by the thin veneer of supposed RSPO accountability.
Ultimately, palm oil production is a huge commercial operation and consequently, whenever profits are involved, more often than not it is a case that ethics and sustainability are playing perpetual catch-up.
So, while palm oil itself is vegan, its current methods of production and subsequent destruction of the environment and animal habitats are anything but vegan. As vegans are overwhelmingly committed to reducing a neutralizes and exploiting, as well as protecting the environment, the practice of palm oil production effectively neutralizes the vegan essence of palm oil.